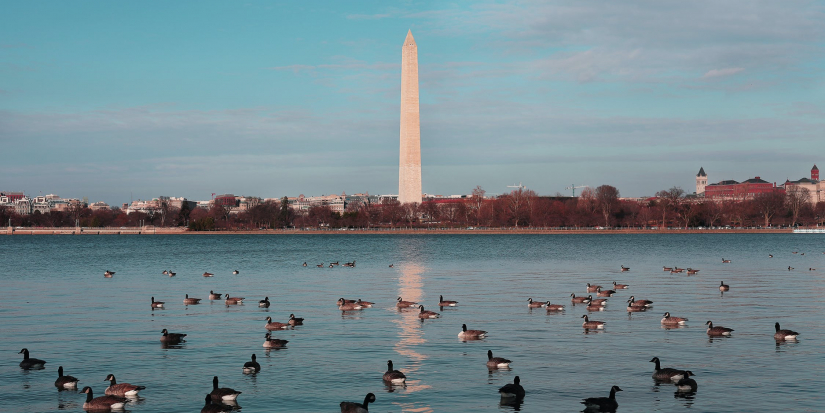 Our Guide to Travel Washington D.C.

Pondering over things to do in Washington DC? Follow our guide to get the best of what Washington has to offer!

Revisit legendary aircrafts at the National Air and Space Museum

The Smithsonian National Air and Space Museum is one of the best Washington attractions the city has to offer. The museum, which boasts an impressive collection of iconic aircraft, space explorers, missiles, and souvenirs, is a must-see destination of Washington D.C.. The National Air and Space Museum is also one of the only museums in the world where you can witness a US Pershing-II, and a Soviet SS-20 nuclear missiles standing next to each other. Visitors can also get a feel of the lunar samples retrieved by the Apollo 17 mission of 1972.

Are you an adrenaline junkie who prefers to sweat it out with activities like running, skating, or biking through unpredictable terrains? Then, Rock Creek Park is the perfect destination to spend a day with several top things to do in Washington! There are around 32 miles of trails along the park with paved bicycle trails. The Rock Creek Park is also home to the Old Mill as well as the site of the Civil War Battle of Fort Stevens. The park is also full of wildlife, and offers an up–close and personal look with the Creature Feature Program every Friday at 4 pm.

Spend a day with historical records at the National Archives

Go back into the past and witness some of the historical documents at the National Archives and Records Administration. The historical site features some of the United States’ most prized possessions and artifacts – the gun used to assassinate John F Kennedy, and the Charters of Freedom (the Constitution, the Bill of Rights, and the Declaration of Independence) to name a few. With accessibility to physical records of the entire nation on your fingertips, this Washington attraction is undoubtedly one of the best places to visit in Washington.

Gaze upon the wonders of the National Museum of Natural History

Seeking top things to do in Washington? Head to the National Museum of Natural History and enjoy one of the best museum experiences in the US. The museum features one of the largest collections of installations with more than 145 million specimens. The installations comprise of everything from stuffed animals to fossils, meteorites, cultural artifacts, and even human remains. There is also no admission fee for the museum, which is open year-round. Enjoy free things to do in Washington with a visit to the National Museum of Natural History.

If you are traveling on a budget and looking for free things to do in Washington, head to the National Zoological Park. What makes it better is that this free zoo is open throughout the year. This Washington attraction also reins in flocks of visitors, making it a popular place for people watching! There are around 1,500 animals in the National Zoological Park, which also includes giant salamanders, and pandas. Visiting the park is also considered as one of the top things to do in Washington with kids.

If you are in Washington between March 20th and April 12th, make sure you attend the National Cherry Blossom Festival.  Celebrate the arrival of spring, and the changing of seasons, with a visit to the annual festival. Cruise through the beautiful Potomac River to enjoy a different perspective of the cherry blossoms in full bloom. Engage in the festival and be a part of one of the best historical things to do in Washington during your stay here.

If you are a person that enjoys contemporary and modern art, then you have to visit the Hirshhorn Museum and Sculpture Garden. The gorgeous cylindrical building hosts hundreds of art installations, and outdoor sculptures, by leading artists from various parts of the world. Include this beautiful Washington museum in your list of things to do in Washington. Don’t miss the impressive selection of Giacometti pieces on display.

Located at the heart of the National Mall, the museum features an attractive collection of contemporary and modern art. The recently renovated National Gallery of Art is yet another Washington museum that falls under free things to do in Washington.  There is also a self-portrait work of the famous artist, Vincent van Gogh, among the numerous art installations. A nice addition to this gallery is the sculpture garden attached, which makes it a perfect choice for things to in Washington this weekend.

Located smack dab in the heart of the Columbia Heights, the Meridian Hill Park offers some of the best picnic spots in the city. The park is loaded with memorials, which even feature statues of Joan of Arc, James Buchanan, and Dante. Meridian Hill Park is also known for hosting the Drum Circle for the last 40 years, which makes it the best place to visit in Washington.

Pay tribute to the fallen heroes at Arlington National Cemetery

Pay homage to the military heroes buried in the Arlington National Cemetery, the military cemetery of the United States. A visit to Arlington National Cemetery is one of the best historical things to do in Washington. All military men killed in action in any branch of military service, or who served for 20 years has the right to be buried at Arlington, along with their spouse. The Marble Amphitheater and the Tomb of the Unknown Soldier are some other places to check out when you visit Arlington.

Gaze upon the Jefferson Memorial at its best!

A visit to the capital cannot be complete without a trip to one of the world’s most-recognized buildings, The White House. The majestic building, which functions as the official residence and workplace of the US President, is open for visitors as well. You get to explore nearly eight rooms of the house’s 132 rooms, making this Washington attraction, a top thing to do in Washington.

Dive into the collection of literature at the Library of Congress

Washington is a city that features an astounding collection of beautiful international architecture on display. The capital is also home to the world’s largest library, The Library of Congress. The national library has a whopping collection of more than 16 million books on display. For those ardent readers, the library offers around 535 miles of bookshelves, which holds more than 100 million items. The visitor center in the ground-floor previews a 20-minute film to get a better understanding of the library. So, what’re you waiting for? Get those reading glasses and head to the library for things to do in Washington this weekend.

Unravel the history of the Korean War

The West Potomac Park features 19 battle-clad poncho wearing soldiers on the move to a United States flag. A fitting tribute to the 12 million Americans who fought the Korean War at the 38th Parallel separating North and South Korea. The Korean War Veterans Memorial is a Washington attraction that should be in all checklists of things to do in Washington. There is also a polished granite wall opposite to the soldiers, which reflects the 19 soldiers as 38 to signify the 38th Parallel separating the North and South Korea.

Escape into the lush greens at United States Botanical Garden

Looking for fun things to do in Washington with kids? The United States Botanic Garden has you covered. The garden, which came into operation back in 1820 during the reign of George Washington, is also one of the oldest botanical gardens in North America. For those traveling on a budget, the garden does not charge an admission fee. Children older than nine can avail of a junior botanist kid’s backpack of exploration from the entry point. Enjoy free things to do in Washington with an exploration of the United States Botanic Garden.